Menu
Skip to the end of the images gallery

Skip to the beginning of the images gallery

FREE SHIPPING on orders over $29!

Got questions? Email us at info@tieronesports.com.

New customer? Get 50% OFF on all string sets. LEARN MORE

"The closest you will find a string playing to natural gut!"

A high-end multifilament string made affordable. With more than 2000 microfibres (16 gauge), Triumph offers ultimate playability and arm friendliness. In addition, this gut-like string will elevate a competitor's playing experience ​with its optimal balanced in power, control and touch. This string is also a perfect match for hybrid string setups!

Who should play this string?

​Players who are looking for an arm-friendly playing experience.
Players who are seeking a well balanced multifilament string for power and control.
Ideal for multi/poly hybrid setups
For all playing levels. 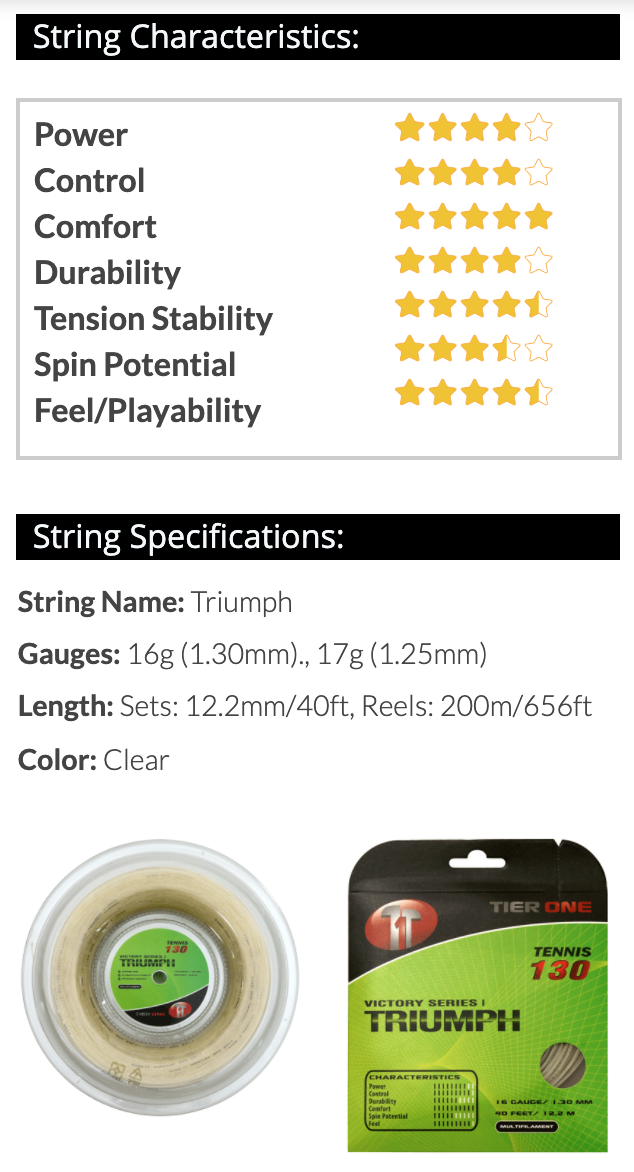 "​I am very surprised about the quality of some of the lesser known string brands nowadays. Triumph is one of them. Amazing comfort and feel. Impact is as smooth as it can be which is a big plus for my arm. I am a 5.5 player and the string lasted me for about 12 hours, which is probably a couple of hours longer than I usually play with Wilson NXT Tour. Most importantly I will be able to save $6 per string set!!!"

"​​​​I recently had a few sets of Tier One strings set out, they were amazing. I used Triumph in a hybrid with one of their poly's and it played like Natural Gut, its a soft and really easy to control shots with. Loved it!"

Triumph performed better in comparison to NXT Tour almost on all levels.

​"​I tested Triumph side by side with Wilson NXT Tour because I was told that it plays similar to NXT. There is always a degree of doubt about the quality of a "no name" string.
Stringing was easy like any multifilament string. Hitting the first few balls, the string had a very smooth, soft response. I was able to control the depth of my strokes nicely. Drop shots and volleys felt great. Very good feel. But the string did not lack in power either. I was able to hit my spots at the serve and had a few aces. Although the string lacked somewhat in spin (especially in comparison to the new generation polys), I was able to generate enough for my kick serve and ground strokes. Durability: The string started to fray at around hour 5 and broke at hour 6.
I would highly recommend this string for anybody who like to play with an arm friendly multifilament string (like Biphase, Xcel, etc.) but does not want to pay $17 for it."

Reviews 1
Write Your Own Review 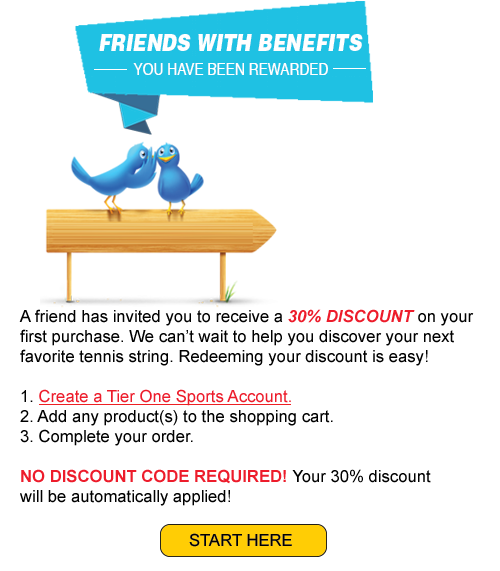